Cathedral Church of the Redeemer 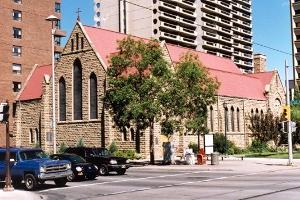 The Cathedral Church of the Redeemer is the first Anglican church to have been constructed in what is now the Diocese of Calgary.

Worship is at the heart of all we do. At the Cathedral we strive to offer worship which combines sublime music, dignified liturgy and thoughtful preaching in the best Cathedral tradition.

From the beginning it has been an integral part of Calgary's history. The original Church of the Redeemer, a wood frame building erected just east of the present site, was completed and opened for worship August 3, 1884. It was proclaimed a Pro [temporary] Cathedral on Feb. 14, 1889, following the creation of the Diocese of Calgary. It was designated a full Cathedral in June of 1949, when it was obvious that a large edifice of British or European proportions would not be built in Calgary.

The present structure was erected during the era of sandstone building construction following the turn of the century. It is of local, rough cut Paskapoo sandstone, and has one of the oldest tin roofs in Calgary. It was completed and opened for services on July 30, 1905. In September, 1974, the Cathedral building was designated a Registered Heritage Site, under provisions of the Alberta Heritage Act, 1973. The Cathedral celebrated the 100th anniversary of the first service held in the building on July 30, 2005.

Monday to Thursday
8:30 am Morning Prayer