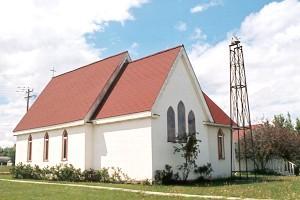 The Parish of St. George's was established in 1937. Services were held in the North Turner Valley High School which is the present clubhouse of the Turner Valley Golf and Country Club. The Church was built in Gladys Ridge, east of Okotoks, in 1907 and moved to Blackie, east of High River, in 1923. It was moved to the current location in Turner Valley in 1949, onto land donated by the Royalite Oil Company.

Who was St. George?

George was Roman solider in the fourth century who was forced to practice his Christian faith in secret. The Roman authorities took harsh measures against any of their soldiers found to be Christian. George courageously declared his faith and despite Diocletian’s many attempts to convert him, George refused. Diocletian eventually ordered his death for failure to recant his Christian faith. In later centuries, George’s following spread westwards and George became the model of a perfect Christian warrior — just the sort of figure that appealed to medieval English kings when they placed their wars of conquest under his protection. That is how St. George came to be invoked as the patron saint of England. But another and far more widespread tradition has seen him as the pattern of what it means to be a Christian in the world — as an image of every Christian’s daily warfare against the forces of sin, ignorance, fear, and injustice.