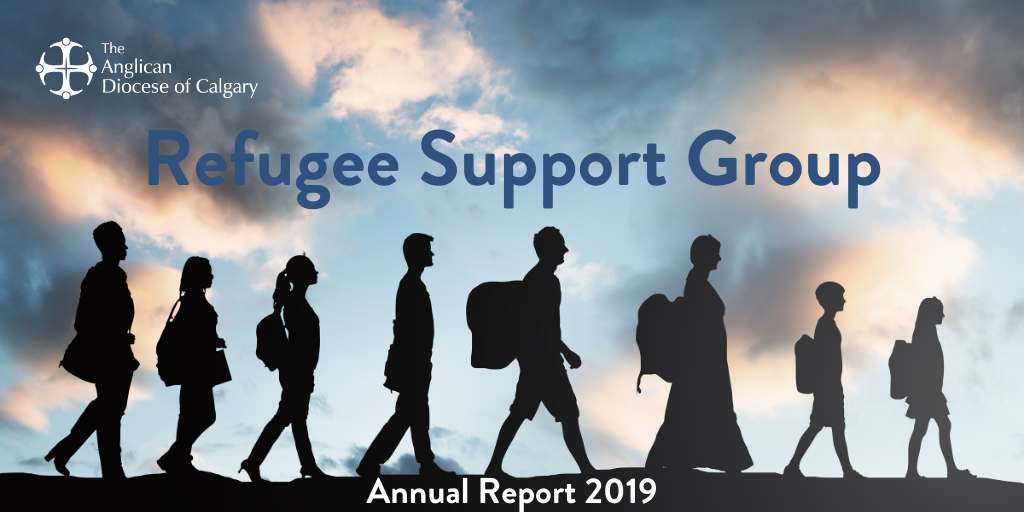 Did you know that since 2015 our Diocese has welcomed and hosted 430 refugees?

In 2019 the parishes of the Anglican Diocese of Calgary sponsored 79 refugees and hosted 46 who arrived.

Projections for the next 2-4 years

We hope to resettle about 50 - 100 Private Sponsored Refugees (PSR) each year. We can do more if we get more volunteers and parishes involved in the settlement.

The Anglican Diocese of Calgary – Refugee Support Group is looking for volunteers to help with the Refugee Program Monitoring Program.

A job description is attached.

Please forward this on to anyone you think would be interested in volunteering.

Note to Parishes who receive requests for sponsorship directly from refugees:

The Anglican Dioceses of Calgary - Refugee Support Group does not take applications directly from refugees. Most of our sponsors already know the refugee(s) they would like to bring to Canada.  Most often they sponsor family member(s) or a refugee known to someone in the sponsoring group. The sponsors must be living in Southern Alberta.

Parishes in the Diocese of Calgary receive many more requests for sponsorship than we have the ability to support.

To come to Canada as a refugee, you must be referred. The United Nations Refugee Agency (UNHCR), a designated referral organization, may refer refugees to the Canadian Government visa office.  Visa Office-Referred (VOR) cases are referred refugees who have been identified overseas by a visa officer as in need of resettlement, but who have no sponsor. They have been determined to be eligible and admissible and are generally ready to travel to Canada once a match has been made.

the Anglican Diocese of Calgary

STATISTICS FOR THE YEAR 2019

A good news story from this past year

Here is an excerpt from a thank you letter sent by the Calgary Centre for Newcomers, regarding how the $10,000 from the Refugee Fund is being used.

“Thank you for facilitating this life-saving gift.

As you know, we had refugees from Africa arrive with no support from the Federal or Provincial governments, except for processing their files to the point of being able to get to Canada. This was despite the fact they had been imprisoned and threatened to be killed due to gender-based hatred and discrimination. Their persecution would have taken a turn for the worse if Canada with our community's support had not gotten them out of the country.

The four individuals required full sponsorship from private sources for one year. Your donation to the Calgary Centre for Newcomers is instrumental in this regard. It helped to fulfill the promises that we made. So, in a very real way, the funds provided saved their lives.

All of the funds are going to support this group of four in a home. We were able to settle all four in a house together to minimize costs. We use the money to help pay for all of their expenses for 12 months; everything including food, clothing, medicine, transit, etc. Thankfully, they are doing well in their new home. In just a short time, they are now learning English and applying for jobs. Two of them are regularly attending affirming churches. We were also able to surround them with a good group of volunteers. The persecution they faced in now behind them.

Please extend our incredible gratitude for your hospitality and the love of strangers that you have demonstrated. It has been truly life-saving.”

[Wording has been altered in several instances to protect the identity and privacy of the people.]